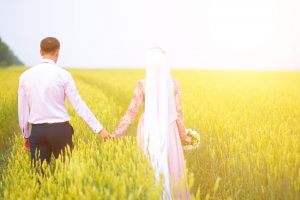 Live with them on a footing of kindness and equity. (An-Nisaa’ 4:19)

Maybe because there has been so much misunderstanding of the role of women, we seem to give it special emphasis in lectures and books.

However since men and women are interdependent, it is not wise to concentrate on one and remain silent about the other.

Islam does not accept the view common in western secular society that before marriage a young man is expected to “sow his wild oats” -whether by frequenting prostitutes or by sleeping around, or having any form of “trial marriage“.

For all such activities the Quran has prescribed a legal punishment of 100 lashes. (Quran 24:2). The Quran, moreover, says:

And as for those who are unable to marry, let them live in continence until Allah grants them sufficiency out of His bounty. (An-Nur 24:33)

To assist young man in this situation, the Prophet in a hadith recorded in Al-Bukhari further advised: “O Young men, those of you who can support a wife should marry, for it keeps you from looking at women and preserves your chastity; but those who cannot should fast, for it is a means of cooling passion.” (Al-Bukhari)

For those who have the means to get married, how should they go about it? We have mentioned that the modem western practice of having girlfriends and trial marriages is emphatically unlawful for Muslims. Instead, it is expected that the family and its friends will play a big role in finding suitable partners for both their sons and daughters.

This process of finding out in detail about the character and circumstances of the proposed partners before allowing the feelings of the boy and girl to be aroused has several advantages. Its effect is to cut out a lot of the embarrassment and temptation and heartache which are common in the western system of courtship and intimate relations before marriage.

The boy is expected to share with his parents certain priorities in the type of girl he hopes to marry, and this is mentioned in a Hadith related by Abu Hurairah in which the Prophet advised, “A woman may be sought for her wealth, her birth, her beauty or her religious character. But do look for the religious woman.”(Al-Bukbari and Muslim)

So, the key to success in marriage is seen as the moral quality of the partner. The ideal Muslim bridegroom, therefore, goes into marriage with the responsible attitude of a person establishing a family on the best possible foundation of love and mutual compassion, and not of infatuation over beauty, ambition for wealth or social position.

The Quran has described the marriage relationship in these terms:

Among His signs is the fact that He has created spouses from among yourselves, so that you may find tranquility with them; and He has put love and mercy between you. In that are sign for people who reflect. (Ar-Rum 30:21)

Having sought his bride in an honorable way, and married her in the manner prescribed by the Prophet -that is with public celebration but the minimum of fuss and ostentation- what are the Muslim husband’s duties?

His first duty is maintenance and protection, and overall responsibility for the welfare of his wife, which is prescribed in the Quran:

Men shall take full care of women with the bounties which Allah has bestowed more abundantly on the former than on the latter, and with what they may spend out of their possessions. (An-Nisaa 4:34)

This includes feeding, clothing and shelter for the wife and for any children of the marriage. This is a legally enforceable duty which remains even after divorce until the expiry of the iddah (waiting period) or even longer in the view of some scholars.

Financial responsibility for the family therefore rests squarely on the husband, and the wife has no duty to contribute to family expenses unless she has the means and the wish to do so.

The legal obligations of a husband do not stop with provision of the basic requirements of maintenance and protection. He is also expected to give her company and marital relations, and to avoid doing anything that would harm her.

These obligations are enforced by the Shari`ah. If a man fails to maintain his wife or fails to visit her for more than a certain period of time, the wife has grounds to be granted a divorce by a Shari`ah court. Similarly, if she can prove to the court that the husband is doing her harm (idrar), be it by drinking alcohol, or beating her without lawful cause, or abusing her or her parents and so on, she is entitled to be granted a divorce. In none of these cases can the husband claim back any part of the dowry or presents he has given to the wife.

The husband is, however, urged in the Qur’an to avoid divorce and try to preserve marriage even if it is not ideal. This is to be done in the first instance by exercising patience with his wife’s faults, The Quran says:

Live with them on a footing of kindness and equity, lf you take a dislike to them, it may be that you dislike a thing while Allah brings about it a great deal of good. (An-Nisaa’ 4:19)

The husband has to continue good treatment of the wife even if divorce is in the end decided upon. He is to keep and feed her a before in his own house until the expiry her `iddah (waiting period) without harassment, (Qur’an 65:1; 65:61) and to make provision for her according to his means.

How did the Prophet himself exemplify this kindness?

Firstly, he was not a difficult or remote or tyrannical husband of the type who regarded all household chores as “women’s work”. In a hadith in Al-Bukhari, Aishah was asked by AI-Aswad ibn Yazid what the Prophet used to do in his house. She replied: “He used to work for his family, that is, serve the family, and when prayer time came, he went out for prayer.” Other hadiths tell us that he used to mend his own clothes.

Secondly, he didn’t make a fuss about food. It is recorded in a hadith from Abu Hurairah in the collection of Muslim: “Allah’s Messenger never found fault with food. If he liked something, he ate it, and if he disliked it, he just abstained from it” This implies that he never complained about the food or its cooking. Aishah further reported that whenever she was sick the Prophet would come to her to show his sympathy.

Nor was he ashamed to let it be known that his love for his wife was greater than his love for any other human being. It is recorded in the Hadith collections of Al-Bukhari and Muslim that someone asked the Prophet: “Who among all people is most beloved by you?” And he said “Aishah.”

He never held himself aloof from his wives as if they were by their nature as women inferior. On the contrary, he included “playing games with one’s wife” as one of the legitimate entertainments. According to a Hadith in Abu Dawud, Ibn Majah and Al-Bayhaqi: “There is no amusement which is praiseworthy except three, namely training a horse, sporting with one’s wife and shooting arrows with a bow.” In illustration of this practice, Aishah records that on more than one occasion she and the Prophet ran races and sometimes she won and sometimes he won.

Most men of nowadays consider it far beneath their dignity to play any sort of game with their wives, and their marriages are the duller and poorer for it. I think this is one of the problems we encounter in the way we learn about the life of the Prophet (peace be upon him). Most of the history books dwell on the political and military aspects of the Prophet’s life, and his personality, which was obviously very attractive, eludes us. We tend for this reason to picture him as always serious, while the Hadith informs us that although he rarely laughed aloud, “Nobody used to smile as much as he did”. This is fully in accordance with the hadith: “Smiling at your brother (Muslim) is charity'”

The Prophet’s attitude towards female children and female education is a beautiful elaboration of what is found in the Quran. The Quran not only forbade the Jahiliyyah practice of female infanticide, but even condemned the common practice of showing disappointment or anger over the birth of a female child. (Quran 16:58-59).

A Hadith related by Ibn Abbas in fact encourages the reverse: “Whoever has a female child and does not bury her alive, nor hide her in contempt, nor prefers his male child over her, Allah will make him enter Paradise.” (Abu Dawud)

The Prophet showed the greatest love and affection for his female children, particularly for Fatimah. Aishah related that: “Whenever the Prophet (peace be upon him) saw Fatimah, he would welcome her, and rising from his seat would kiss her, and then taking her by the hand would seat her in his own seat.” (Al-Bukhari)

He decreed that every Muslim – male and female – must as a duty seek knowledge, and prescribed education for all children in the following words: “No present or gift of a parent, out of all the gifts and presents to a child, is superior to a good broad (general) education.” (At-Tirmidhi and Al-Bayhaqi)

He laid special emphasis on the education of daughters: “Whoever brings up two sisters or two daughters, and gives them a broad education, and treats them well, and gives them in marriage, for him Paradise.” (Abu Dawud and At-Tirmidhi)

This concern for the education of girls was reflected in his teaching of Aishah, who was still a young girl when he married her and was only 18 when he died. She had a natural ability for learning and a strong sense of reasoning and he taught her as much as she was ready to learn. He was so impressed and pleased with her learning that he even told people: “You can learn half your religion from this rosy-cheeked girl.” He therefore encouraged people to consult her on religious matters. And after his death, she became one of the major sources of Hadith.

From all this we can see that some people’s resistance to allowing their daughters to have access to knowledge is not only misguided but quite contrary to all that the Prophet preached and practiced. An ideal Muslim husband is therefore expected to be deeply committed to and involved in the education of all his children -the daughters as much as the sons.

Source: Taken with modifications from the author’s The Ideal Muslim Husband by Aisha Lemu, a British scholar and writer.

What Are the Rights of the Road in Islam?

Why Are We Tested in This Life?