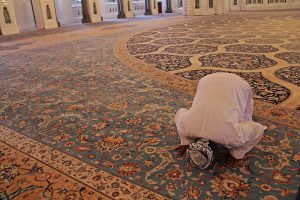 In a direct conversation between God and Moses, prayer was prescribed upon Moses and his followers.

Moses (peace be upon him) married one of the women he had initially helped at waterhole and spent the next ten years working with her father and raising his own family. His new life was quiet and contemplative, he did not have to endure the intrigue of the Egyptian court or the humiliation of his people, the Children of Israel.  Moses was able to ponder the wonders of God and the universe.

Any account of Moses’ life is filled with lessons and guidance, for Moses and for humankind. God put Moses through experiences that would hold him in good stead in his coming mission. Moses had been brought up in the house of the Pharaoh of Egypt; therefore, he was well aware of the politics and intrigue of the Egyptian government. Moses also had firsthand experience of the corruption of Pharaoh himself; the man who had declared himself God.

God Shows His Mercy to Moses

It was through God’s grace and mercy that Moses was able to escape from Egypt and travel about in the lands. He was able to experience other cultures and people. Travel then and now broadens horizons and opens hearts and minds to the differences and the similarities between people of diverse backgrounds. God says:

O humankind! We have created you from a male and a female, and made you into nations and tribes, that you may know one another. (Al-Hujurat 49:13)

During his time in Midian, Moses was a shepherd. Prophet Muhammad (peace be upon him), informed us that all the prophets of God had spent time tending flocks of sheep. It may seem a strange profession but on careful examination, we can see that shepherds learn some valuable lessons while tending to their flocks. A shepherd has a lonely quiet life; there is time for personal reflection and contemplation of the wonders of life.

However, at the same time a shepherd must be constantly on alert for danger. Sheep in particular are weak animals requiring constant care and attention. If even one sheep wanders away from the protection of the flock, it becomes easy prey. A prophet usually has the job of protecting a whole nation, he must be alert and aware of any danger threatening his followers, especially the weak, poor and oppressed among them.

After Moses had completed his term of service that he had pledged to his father in law, he was overcome by homesickness. He began to miss his family and the land of Egypt. Even though he was afraid of what would happen if he returned, he experienced a strange longing to return to the land of his birth. Moses gathered his family together and made the long journey back to Egypt.

Then, when Moses had fulfilled the term, and was travelling with his family, he saw a fire in the direction of Mount Tur. He said to his family, ‘Wait, I have seen a fire; perhaps I may bring to you from there some news, or a burning fire-brand that you may warm yourselves’. (Al-Qasas 28:29)

While Moses was trekking back across the desert, he became lost. It was a cold dark night. Moses saw what appeared to be a fire burning in the distance. He told his family to stay where they were. He had hopes of either getting directions or being able to carry some fire back to warm his family. Unbeknownst to Moses, he was about to participate in one of history’s most amazing conversations. He walked towards the fire, and as he did, he heard a voice.

…Blessed is whosoever is in the fire, and whosoever is round about it! And far removed is God from every imperfection, the Lord of all that exists. “O Moses! Verily! It is I, God, the All-Mighty, and the All-Wise”. (An-Naml 27:8-9)

God spoke to Moses. He asked Moses to remove his shoes for he would be standing on scared ground. God revealed to Moses that he had been chosen for a special mission and bid him listen to what was about to be said.

Verily! I am God, none has the right to be worshipped but I, so worship Me, and perform prayer for My Remembrance. Verily, the Hour is coming and I am almost hiding it that every person may be rewarded for that which he strives. Therefore, let not the one who believes not therein (i.e. in the Day of Resurrection, Reckoning, Paradise and Hell, etc.), but follows his own lusts, divert you, lest you perish. (Ta-Ha 20:14-16)

At this time, Moses must have been mesmerized. He set out for Egypt, following a strange yearning to return to his homeland. He had become lost in the dark and cold and was searching for light and guidance. He walked towards what he thought was a burning fire and found the light and guidance of God.

Moses was holding a stick or staff in his hand. God spoke to him and said what is this stick Moses, tell me about it. Moses answered, “This is my stick, whereon I lean, and wherewith I beat down branches for my sheep, and wherein I find other uses.” (Ta-Ha 20:18)  Moses knew his stick very well; he knew it had no miraculous qualities. God asked Moses to throw the stick to the ground and when he did, it began to slither and shake. The stick had been transformed into a snake.

Moses was afraid; he turned on his heels and began to run away. It is a natural human inclination to be afraid of strange and unknown things, but God wanted to remove this fear from Moses’ heart. He was about to embark on a difficult mission and it was important that he began with complete trust that God would protect him, knowing that there was absolutely no reason for him to be fearful.

God then instructed Moses to put his hand inside his cloak, He revealed to him another sign of his magnificence and omnipotence. Signs, which Moses would need in his coming mission, proof for those who are disobedient and rebellious.

“Insert your hand into the opening of your garment, it will come out white without disease, and draw your hand close to your side to be free from fear (that which you suffered from the snake, and also by that your hand will return to its original state). These are two signs, (miracles, evidences, proofs) from your Lord to Pharaoh and his chiefs. Verily, they are the people who are rebellious, and disobedient towards God”. (Al-Qasas 28:32)

God intended to send Moses to Pharaoh. The man he feared most, the man Moses thought would surely put him to death. His heart constricted on fear but God reassured him.