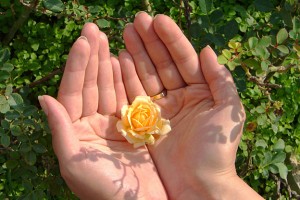 Love is a beautiful emotion.

Love is a beautiful emotion. It encompasses all the most beautiful things in the world. Every relation and connection gets stronger and durable when there is an element of affiliation and love added to it.

Beginning from our first love as a child for our mother to choosing someone to spend our whole life with, love is what makes life worth living. And, like all precious things in the world, this priceless treasure demands guarantees to keep it flourishing.

When you love someone, they are always on your mind and become the driving force of your direction in life. You love to follow them, obey them, do whatever you can to please them and try your best to avoid whatever displeases them.

You share with them your problems and consult them for their best advice. Their name soothes you and their company is the most precious time of your day. Never do their messages and mails go unread or ignored.

The world sees you change when this beautiful feeling overpowers you, may this love be for a human, a mission, a career or simply a car or a gadget. Love changes your priorities and the colour of this feeling is evident on your face, feelings, words and actions.

We all love the Prophet Muhammad (peace and blessings of Allah be upon him), the personality whose greatness is acknowledged by Muslim and Non-Muslim thinkers and scholars. A warm friend and a guide for his companions, a devoted and loving husband for his wives, a shady tree for his daughters, a leader of the Ummah (community of Muslims), an exemplary politician and a reformist who transformed the most uncultured Bedouin into the most disciplined force of people known to history.

His message which begins with the Oneness of Allah and accountability of our deeds in front of Him, gives answers for all the problems we face today. But how many of us have actually explored the message he brought? Do we really know the message?

The Quranic code of life sent to us though our beloved Messenger of Allah still remains untouched only to be ‘recited’ when we are in trouble or a calamity afflicts us or becomes a part of the deluxe package that goes with the bride. How many of us consult his way in our practical lives when it’s a matter of celebration or woe.

We never see the Prophet telling a lie, deceiving a human or even an animal, breaking a pact or a promise. He forgives and prays for the humiliating tribal chiefs of Ta’if and the people who throw stones at him. He rejects social inequality and all sorts of racial supremacy and lays down in his final sermon, the basic charter of human rights,

He sets best examples of justice and warns that the previous nations were destroyed because they only punished their weak and poor for crimes. He teaches us to have best of our behaviours and akhlaq (manners) with our neighbours (Muslim or Non-Muslims) so much so that he once thinks that they might get a share in inheritance (because of the stress Allah has put on their rights). He cries for Allah’s forgiveness for us and stresses us to remain united and not be divided due to language, castes or sects.

In his final sermon he stresses that. ”Learn that every Muslim is a brother to every Muslim and that the Muslims constitute one brotherhood. Nothing shall be legitimate to a Muslim which belongs to a fellow Muslim unless it was given freely and willingly. Do not, therefore, do injustice to yourselves.”

Non-Muslim minorities are at peace under his rule. Justice is served irrespective of faith, status or personal affiliation. He lifts the status of a woman from the one who was buried alive at birth to as high as a guarantee to get best rewards, may it be through serving and obeying one’s mother, taking care of a wife or raising a daughter with love. He brings a message that puts rewards in charity and spending from what we love most, giving an orphan a home and helping a widow to survive.

No one has the right to question anybody’s sincerity of the claim of ‘love for the Prophet’ but we all need some serious self-evaluation. When we claim to be his followers, it automatically makes us his ambassadors and representatives in whatever role and responsibilities we take. Do we consult the Prophet in different matters of our lives?

Let’s follow the Prophet (peace be upon him) to prove that we love him. Let’s celebrate him every day. Let’s light up our hearts with the beacon of his message like we light up the streets on his birthday. Let’s engrave those beautiful stories of his life, which we memorize and narrate, on our actions. Let’s check if our deeds are compatible with our claims of love towards him. In following him, lies the secret of Allah’s love, mercy and forgiveness for us.

Say, (O Muhammad), ‘If you love Allah, follow me, Allah will love you and forgive you your sins. And Allah is Forgiving and Merciful’. (Aal-Imran 3:31)

The Prophet and the Alcoholic

How Did Muhammad React to Personal Abuse? (E-Book)

What Does the Quran Say About Prophet Muhammad’s Manners?