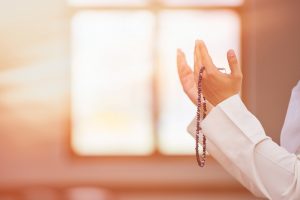 One must believe that Allah revealed Heavenly Books to His Messengers in order to convey them to mankind. These Books, during their times, contained nothing but the truth. All these Books call people to worship Allah alone, and that He is the Creator, Proprietor and Owner, and to Him belong the beautiful Attributes and Names. Allah says:

“Indeed We have sent Our Messengers with clear proofs, and revealed with them the Scripture and the Balance that mankind may maintain [their affairs] in justice.” (Al-Hadid 57:25)

Some of the Books are:
1. The Scriptures of Ibraheem (Abraham) and Musa (Moses): The Qur’an has given a brief insight about the religious fundamentals found in these scriptures. Allah says:

“Or, has he not been informed of what is in the scriptures of Musa? And (of) Ibraheem, who fulfilled [the commandments]: That no bearer of burden shall bear the burden of another; and that man shall have nothing but what he strives for; and that his striving shall soon be seen. Then shall he be rewarded for it with the fullest reward; and that to your Lord is the goal.” (An-Najm 53:36-42)

2. The Torah: The Torah is the Sacred Book which was revealed to Musa. Allah says:

“Verily, We sent down the Torah, in which was guidance and light. The prophets who submitted [to Allah] judged by it for the Jews, as did the rabbis and scholars by that with which they were entrusted of the Scripture of Allah, and they were witnesses thereto. So do not fear the people but fear Me, and do not exchange My verses for a small price. And whoever does not judge by what Allah has revealed – then it is those who are the disbelievers.” (Al-Ma’idah 5:44)

3. The Zaboor (Psalms): The Zaboor is the Book which was revealed to Dawud (David). Allah says:

A Muslim must believe in all the Heavenly Books and he must believe that they are from Allah. It is not lawful for him to abide by their laws though, since these Books were revealed to certain nations at certain times.

The Qur’an has explained some of what was found in the Torah and the Injeel; such as the prophecy of Muhammad (peace be upon him) “…but My mercy encompasses all things. So I will decree it [especially] for those who fear Me and give zakah and those who believe in Our verses. Those who follow the Messenger, the unlettered prophet, whom they find written in what they have of the Torah and the Gospel, who enjoins upon them what is right and forbids them what is wrong and makes lawful for them the good things and prohibits for them the evil and relieves them of their burden and the shackles which were upon them. So they who have believed in him, honored him, supported him and followed the light which was sent down with him – it is those who will be the successful.” (Al-A`raf 7:156-157)

5. The Noble Qur’an: One must hold the following beliefs concerning it:

A. One must believe that the Qur’an is the Speech of Allah which Jibreel (Gabriel) brought in a clear Arabic language to Muhammad. Allah says:

B. One must believe that the Qur’an is the last of the Heavenly Books, which confirms the previous Books concerning the Message of tawheed and the obligation to worship and obey Him.
All previous Books were abrogated by the Qur’an. Allah says:

“[It is] He has sent down upon you, [O Muhammad], the Book in truth, confirming what was before it. And He revealed the Torah and the Gospel. Before, as guidance for the people. And He revealed the Qur’an. Indeed, those who disbelieve in the verses of Allah will have a severe punishment, and Allah is exalted in Might, the Owner of Retribution.” (Aal `Imran 3:3-4)

C. One must believe that the Qur’an contains all divine laws. Allah says:

“This day, I have perfected your religion for you, completed My Favor upon you, and have chosen for you Islam as a religion.” (Al-Ma’idah 5:3)

D. One must believe that it was revealed to mankind at large; not to a specific nation, as were previously revealed Heavenly Books. Allah says:

“And We have not sent you except comprehensively to mankind as a bringer of good tidings and a warner. But most of the people do not know.” (Saba’ 34:28)

E. One must believe that Allah has preserved the Qur’an from all distortions, adulterations, additions, or impairments. Allah says:

“Indeed, We have sent down the revelation and surely, We shall guard it [from distortion].” (Al-Hijr 15:9)

Merits of Belief in Allah’s Books

1. One would realize the mercy and love Allah has for His servants; since He revealed to them Books which guide them to the path which leads to His pleasure. He safeguarded man from confusion and from the evil of Satan.

2. One would realize the great wisdom of Allah; since He gave each nation a set of laws that suited them during their times.

3. To distinguish true believers from those who are not. It is incumbent upon one who believes in his own Book to believe in the other Heavenly Books.

4. To increase the good deeds of the believers; for the one who believes in his Book and the Books that came after his Book, would receive his reward twice. Allah says:

“Those to whom We gave the Scripture before it – they are believers in it. And when it is recited to them, they say: ‘We believe in it. Verily, it is the truth from our Lord. Indeed even before it we have been from those who submit themselves to Allah. These will be given their reward twice over, because they are patient, and repel evil with good, and spend (in charity) out of what We have provided them.” (Al-Qasas 28:52-54)