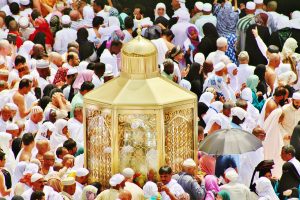 Pilgrims from distant lands converge at a center, pulled in by a spiritual magnetism.

Pilgrimage is an allegory of human life on earth. It is the exteriorization of an inner journey towards truth, or an adventure of spiritual discovery. Pilgrims from distant lands converge at a center, pulled in by a spiritual magnetism.

Thus, pilgrimage is considered a way in which man tries to connect to the Ultimate Reality and live in full harmony with himself and his environment.

Most religious traditions emphasize this aspect of pilgrimage and give it a central role in religion.

The earliest notion of pilgrimage in Judaism comes from the Genesis story of Adam and Eve, in which the happy relationship with God is presented as broken, necessitating a struggle on the human part to move towards God for reconciliation.

The Jews believe they are in exile since God chose Abraham to be the father of God’s chosen people and promised him a land for his people. In the time of Moses, the Jews were exiled in Egypt, then in the desert, and finally they started to settle in Palestine.

The second book of Samuel tells how David captured Jerusalem and brought the Ark of the Covenant to the city. To the Jews, the ark was the symbol of God’s presence in their midst, and so the city of Jerusalem became central to the Jewish identity.

There are three festivals celebrated in Jerusalem every year, and the Jewish families were commanded to undertake a pilgrimage to the city to participate in them (Deuteronomy 16:16).

Pesach celebrates the Exodus from Egypt and the Israelites’ liberation from slavery. Seven weeks are counted from the beginning of Pesach to the feast of Shavuot, which celebrates the giving of the Ten Commandments.

Sukkot (Tabernacles) is a nine-day festival that celebrates the booths the Israelites lived in during the 40 years in the wilderness. Another name for this festival is The Season of Our Rejoicing.

The Temple in Jerusalem was the center of the Jewish religion until its destruction in 70 CE, and all who were able were under obligation to visit it and offer sacrifices during the mentioned feasts.

The western wall of the original temple, known as the Wailing Wall, remains in the old city of Jerusalem and has been the most sacred sight for Zionist Jews. Jews from many countries all over the world make periodic pilgrimages to the holy sites in Jerusalem.

Christianity teaches that man was originally in a state of happiness in the garden of Eden, but there he disobeyed God and was banished out of his “earthly paradise”. God did not abandon him and gave him hope by announcing the coming of the Son of God, who will conquer evil and return man to his lost home.

Christianity views man as standing between the recollection of life in paradise and his yearning for a return to that paradise. This means that a Christian has to consider his earthly life as a pilgrimage until he attains his eternal home of peace.

From this perspective, concrete aspects of pilgrimage – the specific destination and the rites and liturgies accomplished there – are of little importance.

The key to the origin of Christian pilgrimage is the devotion to the memory of Jesus. The faithful visited the places that were filled with the memories of their Lord in his earthly life.

For most people, pilgrimage seemed unequivocally a most holy thing to do; and for most Christians, Jerusalem was associated with the earthly life of Jesus. So from the beginning, pilgrims traveled to Palestine with the simple goal of experiencing firsthand the places in which different biblical events had occurred.

Many Christians associate a pilgrimage center with “sacral power” – the power to heal infirmity, solve problems, grant wishes, and have their sins forgiven. Pilgrimages were considered efficacious in this regard.

It was chiefly in the 19th and 20th centuries that a number of new pilgrimage sites were discovered and developed, often as a result of visions of the Virgin Mary in these places.

Pilgrimage is deeply embedded in the Indian culture. There are so many pilgrimage sites in India that the entire subcontinent may be regarded as one grand sacred space by Hindus.

In the Vedas, one of the most important Hindu scriptures, mountain valleys and the confluences of rivers are spoken of with reverence, as the gods are believed to have dwelled there. The merits of travel to such places are mentioned, but the act of pilgrimage itself in not specifically discussed.

There are many reasons why Hindus go on pilgrimage. First, it is considered an act of devotion to God. Many of the Hindus believe it will add to their good deeds and bring them nearer to salvation.

Other Hindus go on pilgrimage to fulfill a vow as a thank-you to God because they had a good harvest or passed an examination. Some go to make up for a bad deed, and others go to offer a devotional rite for a relative who has died. Many pilgrims take home small jars of river water and other objects they deem holy.

To the Hindus, as to devotees of other religions, pilgrimage is of special spiritual significance. Since Hinduism allows personal inclinations in matters of worship, the importance of pilgrimage places may vary with individuals.

Hindus honor the concept that Dharma is Karma, or religion is morally correct action, and pilgrimage is an essential part of it. Thus, a sinner seeking purification will be advised to go on arduous pilgrimages to acquit his or her soul from earthly errors and to gain salvation. From ancient times, pilgrims have always been held in high esteem because of the difficulties they undergo in their devotion.

One of the hundred pilgrimage destinations in India that attract millions of people every year, and probably the most famous, is Varanasi, which is a holy city and the home of 50,000 Hindu priests. Historically, the city has served as a center of Hindu worship and pilgrimage for nearly 3,000 years, making it perhaps the oldest continually functioning sacred city in the world.

Among the several hundred shrines in Varanasi, the most important is the Golden Temple, dedicated to Shiva. The city is also surrounded by a 35-mile sacred road, the Panch Koshi. Devout pilgrims take six days to walk its circuit, visiting numerous shrines, temples, and gardens along the way.

Another example of Hindu pilgrimage centers is the Four Dhams or the Four Abodes that represent the four points of the compass encapsulating the subcontinent of India.

In commemoration of the trials of Abraham and his family in Makkah, which included Abraham’s willingness to sacrifice his son Ishmael in response to God’s command, Muslims make a pilgrimage to the sacred city of Makkah at least once in their lifetime. This pilgrimage to Makkah and its surroundings, known as Hajj, is the fifth pillar of Islam.

Hajj is an obligatory pilgrimage prescribed by God Almighty on all Muslims who are capable; whereas the pilgrimages of other religions are optional. The origin and history of such pilgrimages show that they were initiated by humans much later than the putative origin of those religions, and the purpose of those pilgrimages is set by the pilgrims themselves: for example, the expiation of sins or a special blessing for themselves.

The real significance of the destination of Hajj to Makkah is that Makkah is the site of the first house built for the worship of the One and Only God of the universe; whereas other pilgrimages derive their importance from their connection to the birth, death, or burial of a prophet or saint. The rites performed at Hajj are commemorative of Abraham, the patriarch revered by Jews, Christians, and Muslims alike.

The way and timing of doing these rituals were taught by Prophet Muhammad as prescribed by Allah.

During Hajj, the pilgrims are asked to focus their attention and devotion on Allah alone, in order to gain His promised forgiveness.

Pilgrims come from different parts of the world; they differ in their culture, ethnicity, and color, but this is never an obstacle, as they are supplicating the One God Who unites them under His guidance and protection.

Prophet Muhammad clarified to all Muslims, in a sermon during the Hajj season, that being superior has nothing to do with a person’s ethnicity, language, or race. Whether a person is Arab, non-Arab, yellow, black, or white is of no significance. The only measure of superiority and goodness in Islam is one’s piety and God-consciousness.