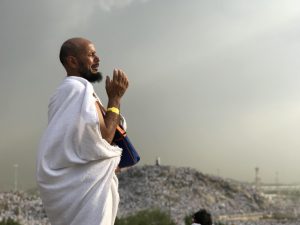 The excellence of first 10 days of Dhul-Hijjah is closely related to the concept of worship of God and monotheism.

As one heads his way to God, it is most probably that one is overtaken by impediments and sins.

The lack of one’s faith and following ill desires and Satan take one away from the straight path of God.

Therefore, Allah has specified certain times and places with extra honor and reward so as to motivate those misled persons to be back.

These times are occasions of goodness for everyone to compete in pleasing Allah and enriching their record of good deeds with multiplied rewards. Actually, at the top of the most preferable and beloved days throughout the year are the first 10 days of Dhul-Hijjah.

The above hadith stresses the excellence and preference of these days over all other days. One may ask “even over the days of Ramadan?” The answer is that the hadith does not exclude any days from this statement whether Ramadan, Fridays, or any other days. Allah, the All-Generous and Openhanded wants people to vie in good doing and pleasant deeds. Hence, He singles out specific places and times with additional honor and reward as a kind of His Generosity.

The reward of prayers, fasting, charity and all good deeds are multiplied and augmented during certain times and in certain places. For example, prayer in the Holy Mosque of Mecca is doubled 100.000 times in reward more than praying elsewhere, fasting the day of Arafah entitles forgiveness of 2 years.

The differentiation and preference of such places or times over the others serve to wake up people’s energy and resolutions towards the pleasure of God. Moreover, this prevents boredom, and revives one’s activity to utilize these occasions to get closer to God and increase their rewards.

The excellence of such times or places is closely related to the concept of worship of God and monotheism. In other words, this preference is not embedded in those times or places themselves as much as it is clung to their encompassment of supreme acts of worship.

When we scrutinize some of the preferred times or places in Islam we come to know this fact easily. For example, Friday is preferred upon all the days of the week because it contains the Friday prayer which represents the most congregating prayer in the week as well as the obligatory Friday sermon.

The month of Ramadan is the most blessed month of the year owing to its involvement of one of the pillars of Islam, namely fasting.

The first 10 days of Dhul-Hijjah are also preferred because they include one of the pillars of Islam, which is Hajj. The sacred House of Kabah is favored upon other places because it is the direction of prayer and the place around which Muslims make the worship of Tawaf.

Thus, the point is that the glorification of certain things in Islam is contingent basically on the relation between them and the obedience of God, worship and monotheism.

In fact, the aforementioned hadith conveys to us a commandment from the Prophet (peace be upon him) to increase good deeds during these blessed days. And the good deeds are numerous; they include prayer, fasting, charity, remembrance of God, night prayer, reciting the Quran, seclusion in the mosque, fasting the day of Arafah etc. A good Muslim should not deprive themselves from the greatest rewards of these good deeds during these days.

Moreover, among the most desirable deeds one may offer in these days is udhiyah (sacrifice) on the tenth day, the first day of Eid. Udhiyah is highly recommended.

It is narrated by Ibn Majah that the Prophet (peace be upon him) said: “Whoever can afford it (i.e. udhiyah) but does not offer it, let him not approach our prayer-place.”

Also, it was narrated in Sahih Al-Bukhari and Muslim that Anas ibn Malik (may Allah be pleased with him) said: “The Prophet sacrificed two white rams speckled with black. He slaughtered them with his own hand, said ‘Allahu akbar’ and put his foot on their necks.” So, if a Muslim is able to offer a sacrifice, he should not neglect it.