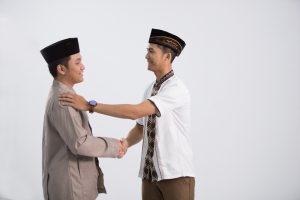 Friendship is a kind of relationship based on mutual affection, consent and respect between more than one people.

It is something gorgeous and honorable but it can be detrimental at the same time. A friend is the mirror of his pal; they generally share a set of interests, inclinations, behaviors, ideas, choices, beliefs, attitudes, etc.

You may not notice these similarities but they are a must in this kind of relation. For this reason, the Prophet Muhammad (peace be upon him) recommends us to be very careful while choosing a friend because of the very fact that the friend leaves significant impacts on the whole character of his friend.

Abu Hurairah (may Allah be pleased with him) reported: “I heard the Prophet (peace be upon him) saying, “Man follows his friend’s religion, you should be careful who you take for friends”. (At-Tirmidhi and Abu Dawud) The word “religion” here refers to the way of life of persons.

Therefore, the Quran alluded to the necessity of finding the righteous ones and taking them as companions owing to the substantial influences of the companions upon one another. Almighty Allah says,

And keep yourself patient [by being] with those who call upon their Lord in the morning and the evening, seeking His countenance. And let not your eyes pass beyond them, desiring adornments of the worldly life, and do not obey one whose heart We have made heedless of Our remembrance and who follows his desire and whose affair is ever [in] neglect. (Al-Kahf 18:28)

The good companion will not entice you to an evil action that displeases God, or recalls the censure of people. Rather, he will surely lend you a hand and assists you to the path of guidance. He will share the virtuous matters with you while the bad friend is generally on the other side.

The Prophet (peace be upon him) makes a comparison between the good and bad friend in the following hadith narrated by Abu Musa Al-Ashari (May Allah be pleased with him) who reported: I heard the Prophet (peace be upon him) saying, “The similitude of good company and that of bad company is that of the owner of musk and of the one blowing the bellows. The owner of musk would either offer you some free of charge, or you would buy it from him, or you smell its pleasant fragrance; and as for the one who blows the bellows (i.e., the blacksmith), he either burns your clothes or you smell a repugnant smell”. [Al- Bukhari and Muslim]

Enjoy watching this interesting video by Sheikh Nouman Ali Khan sheds light on the concept of friendship in Islam and explains how one can get the best friend.