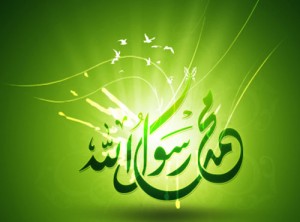 The Qur’an was revealed to the Prophet Muhammad and he preached the Word of Allah to the Makkans, inviting them to abandon idolatry and become monotheists.

For the next thirteen years, the Qur’an was revealed to the Prophet (peace be upon him) and he preached the Word of Allah to the Makkans, inviting them to abandon idolatry and become monotheists.

A few of them, ranging between 80 and 200 persons, accepted his call. Yet, most Makkans, particularly those of his own tribe, opposed him violently.

They saw in the new religion a grave danger to their economic and social domination based upon their control of the Makkah and especially the Kabah.

The new Muslims were tortured and even killed because they said that Allah is One and that we should abandon a sinful life in submission to Allah Alone.

Nevertheless, the Prophet (peace be upon him) continued calling people to Islam and gradually a larger number of men and women began to accept the new faith and submit themselves to its teachings.

An interesting event happened after some of the nobles of Quraish accepted Islam, such as Umar ibn Al-Khattab and Hamzah ibn Abdul-Muttalib.

The people of Quraish gathered and decided that since Muhammad is from the Quraish and he is of noble lineage, they will use this to save their lifestyle and control of Makkah.

They decided to go to the Prophet (peace be upon him) and offer him the dominion of Makkah as the king of the Quraish. They promised him all he could desire if he would just simply give up his message. But in their ignorance, they didn’t realize his faith and sincerity. He told them:

“If you put the Sun in my right hand and the moon in my left hand, I will never leave the call of my Lord.”

The Makkan period revelations consisted of defining true monotheism, correcting the peoples corrupt beliefs, calling to accountability for our sins, describing the reality of life after death, calling to good morals and ethics, teaching people about the previous Prophet’s, and describing the creation of the heavens and the earth as well as all the blessings Allah has given us in it.

In 622 A. C. after long period of humiliation, torture and attacks as well as assassination attempts at the Prophet (peace be upon him) Allah commanded the Muslims to migrate to Yathrib, a city north of Makkah.

The Prophet (peace be upon him) followed the Divine Command and left with his followers for that city which was to be called from then on “Al-Madinah Al-Munawwarah”.

This event was so momentous that the Islamic calendar begins with this migration (Hijrah). In Madinah, the Prophet (peace be upon him) and his companions established the first Islamic state which should serve as the model for all later Islamic societies.

Sadly, most Muslim societies today run much differently than the way the Prophet and the righteous Caliphs did in their days. This sad reality has led to weakness, ignorance, poverty and injustice among Muslim communities.

In Makkah, Umar ibn Al-Khattab asked the Prophet about why Muslims do not assemble an army and take revenge upon the pagans who had oppressed them. The Prophet (peace be upon him) told him that this is not the time for such an idea.

After the Prophet and his companions settled in Madinah, the pagans of Makkah began plotting to attack the Muslims. Muslim informants from Makkah warned Madinah of this plot. After praying for Allah’s guidance, the command came from the Heavens to Muslims to defend themselves and secure Madinah.

So, they set out to an area called Badr between Makkah and Madinah for the sake of Allah and intercepted the pagans who were 1000+ and heavily armed. The Muslims were 300+ with mostly swords and spears and little armor.

In the end, the faith of the believers was more powerful and Divine Assistance took place. After this, there were 2 more major battles which consisted of the pagans coming to surround Makkah with 3000+ men at the mountain of Uhud and later the Jewish tribes gathered 4000 soldiers with the pagans of 6000+ surrounding Madinah. All of these attacks on the believers were unsuccessful in stopping Islam and Allah’s Messenger.

Throughout these battles and especially afterwards, when it became apparent that divine help is in favor of the believers, more tribes began to join Islam and within a few years most of Arabia had embraced Islam.

The believers showed perseverance through the relentless efforts of the pagans and Jews to attack Islam and the Muslims. After the pagans broke a peace treaty initiated by Muhammad (peace be upon him) by killing a group of Muslims, the Prophet was commanded by Allah to go to Makkah with an army of 10,000 in order to finally return Makkah back to its roots of monotheism and free it from paganism and oppression until the Day of Judgment.