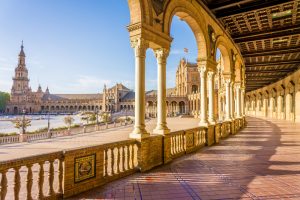 There was once a civilization that was the greatest in the world.

When we look up the word civilization in the Websters online dictionary we get:

“A society in an advanced state of development.”

When looking at the effects of Islam on the Arabs, anyone would recognize a huge transformation in the followers of the Prophet Muhammad (peace be upon him) from the very beginning and for centuries after that.

This “advanced state of development” began the most powerful transition in a society known to the history of man.

Some of the many drastic changes which took place during the 23 years of the Prophet’s mission were:

1- The whole of Arabia completely leaving a long history of Polytheism to the purest form of Monotheism.

2- The Arabs went from a lawless nation of continuous tribal feuds to a unified empire which accepted non-Arabs as part of their civilization and outlawed the incorrect notion of tribalism.

This empire was built on the law of God with an executive leader (Caliph), governers, a judicial system, etc… The law wiped out virtually all social corruption and brought about sweeping justice throughout the land.

3- Although they were masters of their language and highly eloquent, the Arabs were known as the illiterate nation. The teachings of Islam pushed them to not only become literate, but Islam thrust them into an age of scholarship and record keeping in addition to becoming a nation of high level academic publications.

And lastly, the mosques became centers for learning and in the fields of science, math, and medicine they picked up where the Greeks left off. The Muslim civilization literally set the stage for the technological advancement we now live in.

4- The Arabs were a weak nation living under the authority of the Persian and Roman empires for over a thousand years. Within 35 years of the death of the Prophet the Islamic nation had toppled both empires within their region and pushing the Romans into the heart of Europe.

The Muslim rule replaced these material empires of power and wealth which oppressed the commoners with justice and inclusivism.

5- Arabs had good qualities of generosity and honor, but they were generally an immoral people engulfed in drunkeness, prostitution, and gambling. The Islamic Law strictly forbade all of these things and put heavy consequences upon those who indulged in them.

6- The Arab society was deeply into myth and superstition. Islam taught logic and common sense and brought forth a science for accepting narrated scripture which wouldn’t allow error in belief or practice. In addition to that Islam teaches that nothing happens without the will of Almighty God and that His knowledge encompasses everything past, present, and future.

I would like to introduce the subject of the great Islamic Civilization and its noble characteristics with a speech given by a non-Muslim business woman from today’s Western civilization. The woman who gave this speech is Carly Fiorina was the CEO of Hewlett Packard from 1999 to 2005 until she resigned from her position. She has a thorough background in history as well as business. This speech was given on Sep. 26, 2001 in Minneapolis, MN.

The speech it titled “Technology, Business and our way of life: What’s Next?”

“There was once a civilization that was the greatest in the world. It was able to create a continental super-state that stretched from ocean to ocean, and from northern climes to tropics and deserts. Within its dominion lived hundreds of millions of people, of different creeds and ethnic origins.

One of its languages became the universal language of much of the world, the bridge between the peoples of a hundred lands. Its armies were made up of people of many nationalities, and its military protection allowed a degree of peace and prosperity that had never been known. The reach of this civilization’s commerce extended from West Africa to China, and everywhere in between.

And this civilization was driven more than anything, by invention. Its architects designed buildings that defied gravity. Its mathematicians created the algebra and algorithms that would enable the building of computers, and the creation of encryption. Its doctors examined the human body, and found new cures for disease. Its astronomers looked into the heavens, named the stars, and paved the way for space travel and exploration.

Its writers created thousands of stories; stories of courage, romance and magic. Its poets wrote of love, when others before them were too steeped in fear to think of such things.

While modern Western civilization shares many of these traits, the civilization I’m talking about was the Islamic world from the year 800 to 1600, which included the Ottoman Empire and the courts of Baghdad, Damascus and Cairo, and enlightened rulers like Suleiman the Magnificent.

Although we are often unaware of our indebtedness to this other civilization, its gifts are very much a part of our heritage. The technology industry would not exist without the contributions of Arab (Muslim) mathematicians. Sufi poet-philosophers like Rumi challenged our notions of self and truth. Leaders like Suleiman contributed to our notions of tolerance and civic leadership.

And perhaps we can learn a lesson from his example: It was based on meritocracy, not inheritance. It was leadership that harnessed the full capabilities of a very diverse population that included Christianity, Islamic and Jewish traditions.

This kind of enlightened leadership– leadership that nurtured culture, sustainability, diversity and courage led to 800 years of invention and prosperity.

In dark and serious times liek this, we must affirm our commitment to building societies and institutions that aspire to this kind of greatness. More than ever, we must focus on the importance of leadership and decidedly personal acts of leadership”