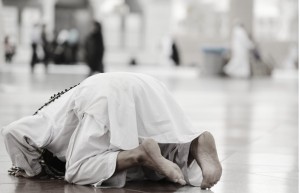 God mentions the obligation of Prayer next to accomplishing monotheism which is the superior act in Islam.

Nothing is more distinctive and characteristic to Muslims than salah (Prayer). Once you see a mosque or a person in a state of standing, bowing or prostration on a carpet while lowering their gaze to the earth, you immediately know they are Muslim. If you visit any country with a Muslim majority, you will hear a normal call (Adhan) sent out by megaphones from everywhere announcing the coming of the Prayer time. You will see great masses of people rushing to the mosques once they hear that call. It is Prayer.

Muslims go for Prayers at least five times in the day. The times of Prayer are distributed along the day; in the morning, midday, evening and night in five times. This way of worship is not found in any religion which calls to one’s attention. Let’s understand this important act of worship in Islam in the following lines.

Prayer is the Cornerstone of Islam

In a Prophetic hadith reported by Ibn `Umar that the Messenger of Allah (peace be upon him) said, “Islam is based on five (pillars): testifying that there is no true god except Allah and that Muhammad is His slave and Messenger; performing of Prayer; the payment of Zakah (obligatory charity); performing Hajj (pilgrimage) to the House [Ka`bah); and fasting the month of Ramadan.” (Al-Bukhari and Muslim)

This narration speaks of the basic components of Islam that every Muslim has to accomplish within their capacity. The hadith likens Islam to a building that has five pillars upon which it is set up. However, if we look into these five pillars, we will come to know that only two of them are by no means escapable by any Muslim. These two things are the declaration of faith and Prayer. As for the other three pillars, they depend on capability in the sense that if you cannot afford them financially or physically, they are not required from you. However, Prayer is inescapable; a Muslim has to do it so long as he/she is sane and alive. If a Muslim is sick or in a state of travel or even war, Prayer is still in demand with change of some of its parts.

Prayer has a special merit

According to the Qur’an, God mentions the obligation of Prayer next to accomplishing monotheism which is the superior act in Islam. God says,

And they were not commanded except to worship Allah, [being] sincere to Him in religion, inclining to truth, and to establish Prayer and to give zakah. And that is the correct religion. (Al-Bayyinah 98:5)

The Prophet (peace be upon him) said as narrated from Abu Hurairah: “The first deed for which a person will be brought to account on the Day of Resurrection will be his Prayer. If it is good then he will have prospered and succeeded, but if it is bad then he will be doomed and have lost. If anything is lacking from his obligatory Prayers, the Lord will say, ‘Look and see whether My slave did any voluntary Prayers, and make up the shortfall in his obligatory Prayers from that.’ Then all his deeds will be dealt with likewise.” (An-Nasaa’i and At-Tirmidhi)

The hadith shows that Prayer is extremely required from the Muslim being the first deed that a Muslim will be asked about by Allah. Moreover, it must be perfected with utmost care or otherwise its reward will be diminished.

Prayer is a supreme obligation

The scholars of Islam are unanimously agreed that Prayer is an obligation and this is sustained with numerous texts from the Qur’an and Sunnah. Allah (Glory be to him) says,

And to establish Prayer and fear Him.” And it is He to whom you will be gathered. (Al-An`am 6:72)

Ibn `Abbas reported: “The Prophet appointed Mu`adh  as governor of Yemen, and at the time of his departure, he instructed him thus: “First of all, call the people to testify ‘La ilaha illallah’ (there is no true god except Allah) and that I (Muhammad) am the Messenger of Allah, and if they accept this (declaration of Faith), then tell them that Allah has enjoined upon them five Prayers during the day and night…” (Al-Bukhari and Muslim)

Accordingly, Prayer is an individual obligation upon every Muslim. However, this is not the end of the story. All the obligations of Islam has been imposed through revelation except Prayer that was imposed directly from God to His Prophet Muhammad during the night journey (Al-Israa’ and Al-Mi`raj) in which the Prophet visited Jerusalem them was transferred to the Heavens to meet Allah, the Almighty.

Surely, this indicates a special merit for Prayer. Anas bin Malik reported in the long hadith describing this journey, “The Messenger of Allah said, “Then Jibril ascended with me to a place where I heard the creaking of pens.” The Prophet said, “Allah enjoined fifty Prayers on me…”  (Al-Bukhari)

The rest of the hadith shows that the number of Prayers was reduced thereafter to five Prayers daily. Indeed, the place and time of the prescription of Prayer are highly esteemed and indicate a sublime status of this worship.

Prayer is a means of salvation

Al-Bukhari and Muslim narrated from Abu Hurairah that the Prophet (peace upon him) said, “What do you think if there was a river by the door of any one of you and he bathed in it five times a day, would there be any trace of dirt left on him?” They said, “No trace of dirt would be left on him.” He said, “That is like the five daily Prayers, by means of which Allah erases sin.” (Al-Bukhari and Muslim)

Also, Abu Hurairah (may Allah be pleased with him) reported: The Prophet said, “The five daily (prescribed) Prayers, and Friday (Prayer) to the next Friday (Prayer), and the fasting of Ramadan to the next Ramadan, is an expiation of the sins committed between them, so long as major sins are avoided.” (Muslim)

Prayer is a distinction between the Muslim and non-Muslim

The Prophet (peace be upon him) said in the well-known hadith narrated by Buraidah (may Allah be pleased with him) that the Messenger of Allah said, “That which differentiates us from the disbelievers and hypocrites is our performance of Prayer. He who abandons it, becomes a disbeliever.” (At-Tirmidhi)

Also, Jabir narrated that the Prophet (peace be upon him) said: “Between disbelief and faith is abandoning the Prayer.” (At-Tirmidhi)

One thought on “Prayer: a Special Obligation in Islam”

The prayer is the standard of Islam. Whosoever loves prayers, and observes their limits, timings and methods, is a true believer.