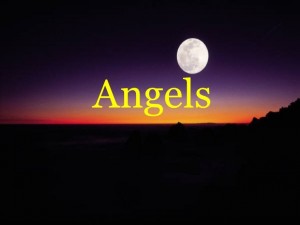 The angels are mystical beings that Allah the Almighty created from light.

`Umar ibn Al-Khattab (may Allah be pleased with him) narrated that the companions were sitting with the Prophet (peace be upon him) and someone entered dressed in very white clothes and having extraordinary black hair. No signs of fatigue of journey appeared on him and he was known to none of us. He sat down facing the Prophet and said to him, “… Tell me about iman (faith).” The Prophet said: “It is to believe in Allah, His angels, His Books, His Messengers and the Last Day and that you believe in preordainment (destiny), its bad and good consequences. …” Then he departed. The Prophet of Allah kept silent for a while then he said to me, “O `Umar! Do you know who the questioner was?” I replied, “Allah and His Messenger know better.” The Prophet said, “He was Jibril (Gabriel); he came to you to teach you your religion.” (Muslim)

It was an angel that descended to ask the Prophet the main questions that constitute the milestones of the Islamic creed. He asked about Islam, iman, ihsan (perfection) and the Last Day. In the quoted part, the Prophet answered the question about faith, making the belief in angels part and parcel of one’s faith, without which faith is deficient and unaccepted.

Who are the angels?

The angels are mystical beings that Allah the Almighty created from light.  They are able to take multiple forms, and they cannot be described as males or females. Ibn Hajar said, “The angels are spiritual creatures bestowed the ability to take different forms and they live in the Heavens.” (Fat-h Al-Bari)

Do we have to believe in angels?

Belief in angels, as mentioned in the Qur’an and the authentic narrations from the Prophet (peace be upon him), is an indispensable part of the Muslim’s faith. Denying their existence is nothing but an act of disbelieving the Qur’an and Sunnah which rules one out of the fold of Islam. The proofs of this are numerous, Almighty Allah says in the Qur’an,

The Messenger (Muhammad) believes in what has been sent down to him from his Lord, and (so do) the believers. Each one believes in Allah, His Angels, His Books, and His Messengers. (Al-Baqarah 2:285)

Almighty Allah stated that those who disbelieve in them have gone astray indeed. He says,

And whosoever disbelieves in Allah, His Angels, His Books, His Messengers, and the Last Day, then indeed he has strayed far away. (An-Nisa’ 4:136)

As for the hadiths of the Prophet, they are plentiful in this regard. In addition to the hadith quoted above which concluded that belief in angels is a pillar of faith, Abu Dharr (may Allah be pleased with him) reported that the Prophet said, “Heaven has squeaked, and it has right to do so. By Him, in Whose Hand my soul is, there is not a space of four fingers in which there is not an angel who is prostrating his forehead before Allah, the Exalted.” (At-Tirmidhi) He stated that the angels are existent and thus negating this implies disbelieving the Prophet which is an act of disbelief.

What is the description of angels?

The following are the main attributes of the angels:

The Qur’an and Sunnah indicate that the angels are given the capacity to take numerous forms by the permission of Allah.  In the Qur’an, Jibril came to Maryam (Virgin Mary) in the form of a man. Almighty Allah says,

She placed a screen (to screen herself) from them; then We sent to her Our ruh (angel Jibril (Gabriel)), and he appeared before her in the form of a man in all respects. She said: “Verily! I seek refuge with the Most Beneficent (Allah) from you, if you do fear Allah.”  (The angel) said: “I am only a Messenger from your Lord, (to announce) to you the gift of a righteous son.” (Maryam 19-17-19)

In the hadith of `Umar, he said “While we were with the Messenger of Allah one day, a man appeared before us whose clothes were exceedingly white and whose hair was exceedingly black. We could see no signs of travel on him, but none of us knew him. He came and sat before the Messenger of Allah, putting his knees against his, and placing his hands on his thighs, then he said: “O Muhammad, tell me about Islam…” At the end of the hadith, the Prophet said, “That was Jibril (peace be upon him) who came to you to teach you your religion.” (An-Nasa’i) It indicates that Jibril, the angel, came to them in the form of man.

The texts of the revelation show that Allah has created the angles in big sizes. The Messenger of Allah (peace be upon him) said, describing Jibril: “I saw Jibril descending from heaven, and his great size filled the space between heaven and earth.” (Muslim) Also, Jabir ibn `Abdullah (may Allah be pleased with him) said that the Prophet said: “I have been given permission to speak about one of the angels of Allah who carry the Throne. The distance between his ear-lobes and his shoulders is equivalent to a seven-hundred-year journey.’” (Abu Dawud)

It is known that the angels do not eat, drink or copulate. They are free from such desires. When they came to Ibrahim (Abraham, peace be upon him) in the shape of full men he presented for them some food but they refused to eat. The Qur’an says,

Then he turned quickly to his household, brought out a fatted calf, and placed it before them. He said, ‘Will you not eat?’ (When they did not eat), he conceived a fear of them. They said: ‘Fear not,’ and they gave him glad tidings of a son endowed with knowledge. (Adh-Dhariyat 51:26-28)

The angels cannot be described as males or females and they are not subject to any kind of procreation or sexual reproduction. Rather, all of them are created directly by Allah, the Almighty. They do not have any inclination to sex or food or whatever because they are created solely for the service of man and the worship of God.

The Qur’an describes the angels as constant worshippers of God who never disobey him. Almighty Allah says,

O you who believe! Ward off from yourselves and your families a Fire (Hell) whose fuel is men and stones, over which are (appointed) angels stern (and) severe, who disobey not, (from executing) the Commands they receive from Allah, but do that which they are commanded. (At-Tahrim 66:6)

To Him belongs whosoever is in the heavens and on earth. And those who are near Him (i.e. the angels) are not too proud to worship Him, nor are they weary (of His worship). They (i.e. the angels) glorify His Praises night and day, (and) they never slacken (to do so). (Al-Anbiya’ 21:19-20)

What are the fruits of belief in angels?

1 – Recognizing Allah’s Omnipotence and Power. The angels with their capacities and enormous sizes are among Allah’s creation which proves His Majesty.

2 – Thanking Allah because He takes care of mankind. He appointed angels to protect them, record their deeds and other beneficial tasks.

3 – Imitating the angels in continual obedience to Allah without negligence or weariness.

Ruqyah for the Cure of Black Magic and Jinn Possession

Is Coronavirus a Divine Punishment?

I believe in angel.

Description about Angel Gibrail has been given. I want to know more about other Angels – like Angel Israfil, Mikail, Azrail, etc. And any other.

Thank you for your comment. Other angels can be covered in other articles.

Muslims also believe in all Angels as creation from God the Almighty. They never disobey God and they surrender to His Commands.