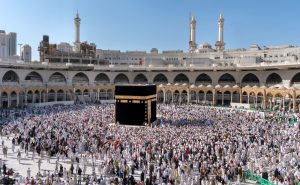 Changing the qiblah was a test for the believers.

We appointed the direction of prayer which you formerly followed in order that We might distinguish those who follow the Messenger from those who turn on their heels. (Al-Baqarah 2:143)

From these few words, one can immediately identify the divine approach in educating Muslims and preparing them, from that early stage of their development, for the role of custodian of Allah’s message and the leadership of mankind.

As part of that transformation, it was essential for that nascent community to be freed of all traces of paganism and ethnocentricity, and to become totally obedient and dedicated to the new religion of Islam.

The early Muslims had to realize that their values and standards in life must, from then on, be derived from the divine revelations being regularly communicated to the Prophet Muhammad.

In pre-Islamic days, certain elements of polytheism and racism had crept into the Arabs’ understanding of the faith of Abraham and the status of the Sacred House in Makkah. The Kabah had come to be venerated as an exclusively Arab shrine.

This was contrary to its intended purpose, since it had been established by Prophet Abraham and his son Ishmael (may Allah’s peace be upon them) as a symbol of purely monotheistic faith and for the reverence and worship of Allah alone.

To correct the situation and to test their faith and loyalty to the Prophet Muhammad (peace and blessings be upon him), Allah commanded the Muslims to adopt Jerusalem as the direction they face in prayer.

Although it was not clear to the Muslims at the time, the measure was meant to be a temporary one, specifically intended to decide where their allegiance would really lie.

It was a delicate decision, but Islam is a complete and self-sufficient religion. It does not need to be supplemented or augmented by other religious beliefs. It does not accept any lingering traces of un-Islamic ways, serious or trivial. This is indeed the point implied in the Quranic statement:

We appointed the direction of prayer which you formerly followed in order that We might distinguish those who follow the Messenger from those who turn on their heels. (Al-Baqarah 2:143)

Allah certainly knows everything before it happens. However, He wishes that what is kept deep in people’s hearts should first appear in action before He holds them accountable for it. His grace means that He does not hold man answerable for his thoughts and feelings; He only holds man accountable for what he does.

It was also a critical decision because Allah was aware that it was going to be a hard test for some Muslims, still fresh from idolatry. But He was also there to provide help and support for the sincere ones: “It was indeed a hard test except for those whom Allah has guided.” (Al-Baqarah 2:143) With Allah’s guidance every difficulty becomes easy.

For yet further reassurance, Allah affirms that the prayers the Muslims had performed facing Jerusalem were valid and the reward for them guaranteed.

Allah would never have let your faith be in vain. Allah is Compassionate and Merciful to mankind. (Al-Baqarah 2:143)

Allah would have never burdened the Muslims with more than He knew they would be able to bear. As long as their intentions were genuine and their determination sincere, Allah was sure to come to their assistance and lighten the tasks expected of them.

If a certain hardship or test is meant to reflect Allah’s wisdom and purpose, passing such a test is indicative of His mercy and compassion. Thus the Muslims could feel content, confident and free of worry about the past and the future.

A Beginners Guide to Prayer in Islam (Watch)