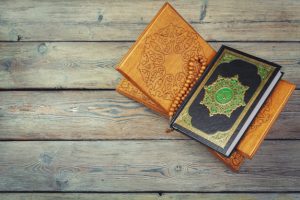 The Quran told about previous generations and the people of the past.

In what follow, we will mention some evidence will prove that the Quran is God’s word:

Quran is the pinnacle of linguistic perfection

The Arabs of Jahiliyah (pre-Islamic era) were not accustomed to its form. Their linguistic abilities were hindered by the fact that its expression was worded in the shortest of forms many times leaving out information without losing any of bayan (the clear meaning).

The Quran’s wonderful structure was unique when it comes to the beginning of verses, their ending, and the places where one stops (when rehearsing it).

This is added to a refined way of presenting truth and the true knowledge of God.

The Quran’s beautiful word and kind insinuation, easiness of construct and correctness of ordering made the minds of the purest of desert dwellers amazed and the understanding of the masters of the tongue struck.

The wisdom behind this intended differentiation in which the Quran was revealed was to leave no doubt for those who would encounter it.

Record of things to come

The Quran has a record of things to come, which came to pass in accordance with the way God has intended. God said:

You shall most certainly enter the Sacred Mosque (Makkah), if God pleases, in security, (some) having their heads shaved and (others) having their hair cut, you shall not fear. (Al-Fath 48:27)

When God revealed this verse, it seemed distant because Makkah was populated with around 25,000 people and the Muslims had been prevented from entering Makkah.

This verse was alluding to a miracle and yet after a year or so it happened. There are many other verses like this.

Telling about previous generations and the people of the past

The Quran told about previous generations and the people of the past and it was known (to the people of Quraish) that Muhammad (peace be upon him) was but an illiterate who neither read nor wrote.

He did not sit with teachers in schools, nor mixed with the learned. He was raised within a people who knew no book. They were ignorant when it came to scientific inquiry. God said:

Surely this Qur’an declares to the children of Israel most of what they differ in. (An-Naml 27.76)

Revealing the secrets of those who opposed i

The Quran revealed the secrets of those who opposed it and what they used to plot. Their deceit was revealed to the messenger of God.

The Quran includes detailed knowledge of scientific facts that the science didn’t uncover until recently.

The Quran is free of contradiction despite the fact that it is a large book which includes many facts and various arts.

If it were from any other than God, they would have found in it many a discrepancy. (An-Nisaa’ 4:82)

The Quran is s living miracle

The Quran is a living miracle, for it is read everywhere by all nationalities in uniformity, and God has promised to protect it. It is an established argument that, in contrast to other prophets whose miracles disappeared with them, the Quran is Muhammad’s lasting miracle.

You Never Feel Bored When you read the Quran

It includes both proof and proven. Those who understand the meaning know how to derive proof and how to find religious dictum at the same time when they consider both the way it is read and the way it is understood.

It is conciseness of words (balaghah) which proves its miraculous character. It is with meaning that one finds God’s order and His warning.

Learning it by heart; hifzh (memorizing) has been made easy. The fear that comes to the heart when hearing it and the humbleness that surrounds those reading it are beyond description.

Facts about the Unique Eloquence of the Quran

One thought on “Is the Quran God’s Word?”