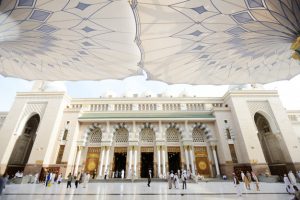 He spoke softly, never abused anyone, forgave even his worst enemies.

Throughout those years, when Prophet Muhammad (peace be upon him) was surrounded by hostile forces and ultimately triumphed over them, he continued to purify the souls and uplift the morals of his followers and lay the foundations of a just and compassionate family, society and state.

So, his mission was now complete: he had created a new man, and changed the lives of multitudes of men and women by bringing them in total surrender to their Creator.

He had created a new society: one based on justice.

In his own life example, and in the Quran, mankind was given the light and way of a godly life.

It is remarkable that this entire epoch-making revolution which transformed not only Arabia but all of mankind for all time to come and which heralded the birth of the most brilliant civilization in the world cost no more than 750 lives, mostly opponents, in the various battles.

Yet the Prophet is sometimes maligned as a man of violence by those who have exterminated thousands of people in pursuit of their civilizational ideals.

The Prophet performed his only Hajj in the tenth year after migration to Madinah. In the Plain of Arafat, he gave a sermon of unsurpassable beauty and lasting value:

‘No man has any right to lord over other men; all men are equal, whatever their origin, colour or nationality.’

A few months later, in the eleventh year after Hijrah, the Prophet Muhammad died. He was buried in the house in which he had lived in Madinah. The Prophet possessed a character of exquisite beauty and charm. He was merciful, kind and compassionate.

He loved children and taught kindness to animals. He spoke softly, never abused anyone, forgave even his worst enemies.

He lived a very simple life. He repaired his own shoes and clothes. He lived frugally, sometimes for days no food was cooked in his household.

According to every standard by which human greatness can be measured he was matchless; no man was ever greater!

Who Is Muhammad? (Part 4) Attacks by the Makkans

What Is the Image of Prophet Muhammad in the West?

The Glad Tidings of the Coming of Prophet Muhammad

Who Is Muhammad and What Was His Message?

Tufayl ibn `Amr Ad-Dawsi: Prophet Muhammad as I Knew Him