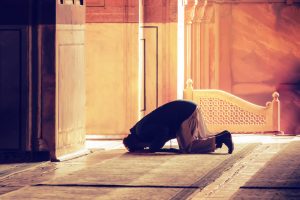 A Muslim is one who commits himself to live in accordance with the teachings, commands, and guidance of God.

In this episode “What Is Monotheism?“, Dr. Jamal Badawi focuses on five basic points.

The Muslim population is close to one billions in all countries and places in the world. Arabs are actually a small minority among the Muslims.

The second main point covers the notion of religion as understood by Muslims. It is not just a matter that is restricted to the basic rituals or religious observations but rather an all-encompassing notion. Religion is a way of life that includes the social, economic and political aspects of life and it’s all integrated.

The third point that was discussed is the meaning of the term Islam itself. It is an attributive title. It is not just a name that is derived from the name of a person, a place, or locality. It is a name that carries within itself the meaning of Islam. The word Islam means, in Arabic, to achieve inner and outer peace as well as peace in the community and the world at large by submitting oneself to the Will of God and the obedience of His command.

Within this kind of basic definition of Islam, following the path of God, we said that all prophets, throughout history actually preached the same kind of basic Islam and that it was simply fulfilled and completed with the advent of prophet Muhammad.

We concluded not only that Mohammedanism is a mistaken and offensive name for Islam but the fact that all the prophets were brothers, preaching for the same God, and those who sincerely follow them are also regarded as following the same basic path of Islam.

The fourth point went over the definition of a Muslim. Based on the definition of Islam, we can say that a Muslim is one who commits himself to live in accordance with the teachings, commands, and guidance of God as derived from the revelation.

Being a Muslim is not just a title that someone can claim or pay lip service to. A true Muslim is one who actively follows the path of Islam.

The fifth and final point covered is this universal outlook of Islam towards prophets and towards followers of other faiths would provide a very good foundation, a very good beginning, to remove or demolish the barriers of fanaticism, prejudice and stereotypes which are sometimes propagated by mistaken sources which prevents the Islamic faith in its true perspective.

This should provide, hopefully, more cooperation between the various people following different prophets (who are all considered Muslims in Islam) for the good of all.

Listen to this episode in which Dr. Jamal Badawi answers the following questions: