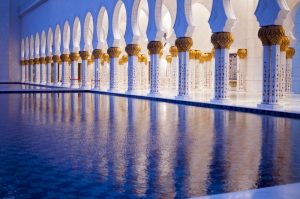 Islam provides guidance for all walks of life.

In the previous article on the basic characteristics of Islamic ideology, we covered two points: 1- simplicity, rationalism and practicalism and 2- Unity of matter and spirit.

In this part, we will be covering two other basic characteristics of Islamic ideology.

3- A Complete Way of Life

Islam is not a religion in the common, distorted meaning of the word, confining its scope to the private life of man. It is a complete way of life, catering for all the fields of human existence.

Islam provides guidance for all walks of life – individual and social, material and moral, economic and political, legal and cultural, national and international.

The Quran enjoins man to enter the fold of Islam without any reservation and to follow God’s guidance in all fields of life (Quran 2:2018)

In fact, it was an unfortunate day when the scope of religion was confined to the private life of man and its social and cultural role was reduced to naught.

No other factor has, perhaps, been more important in causing the decline of religion in the modern age than its retreat into the realm of the private life.

In the words of a modern philosopher:

‘Religion asks us to separate things of God from those of Caesar. Such a judicial separation between the two means the degrading of both the secular and the sacred… That religion is worth little, if the conscience of its followers is not disturbed when war clouds are hanging over us all and industrial conflicts are threatening social peace. Religion has weakened man’s social conscience and moral sensitivity by separating the things of God from those of Caesar.’

Islam totally denounces this concept of religion and clearly states that its objectives are purification of the soul and the reform and the reconstruction of the society.

We verily sent Our messengers with clear proofs and revealed with them the Scripture and the Balance (i.e. the authority to establish justice), that mankind may observe justice and the right measure; and He revealed iron (i.e. coercive power) wherein is mighty power and many uses for mankind and that Allah may see who helps Him and His Messenger through unseen. (Quran 57:25)

The command is for none but Allah; He has commanded that you obey none but Him; that is the right path. (Quran 12:40)

(Muslims are) those who if We give them power in the land, establish (the system of) Salah (prayers and worship) and Zakah (poor due) and enjoin virtue and forbid vice and evil. (Quran 22:41)

Thus, even a cursory study of the teachings of Islam shows that it is an all-embracing way of life and does not leave out any field of human existence to become a playground for satanic forces.

4- Balance between the Individual and Society

Another unique feature of Islam is that it establishes a balance between individualism and collectivism. It believes in the individual personality of man and holds everyone personally accountable to God.

It guarantees the fundamental rights of the individual and does not permit anyone to tamper with them. It makes the proper development of the personality of man one of the prime objectives of its educational policy.

It does not subscribe to the view that man must lose his individuality in society or in the state. According to the Quran:

And whatever suffering you suffer, it is what your hands have wrought. (Quran 42:30)

God does not change the condition of a people unless they first change that which is in their hearts. (Quran 13:11)

On the other hand, it also awakens a sense of social responsibility in man, organizes human beings in a society and a state and enjoins the individual to subscribe to the social good.

Prayer, in Islam, is offered in congregation which inculcates social discipline among the Muslims.

Everyone is enjoined to pay Zakah and it has been laid down in the Quran that:

The alm-seeker and the destitute have their due rights in their wealth. Quran, 51: 19).

“All mankind is a fold every member of which shall be a keeper or shepherd unto every other, and be accountable for the entire fold.”

“Live together, do not turn against each other, make things easy for others and do not put obstacles in each other’s way.”

“He is not a believer who takes his fill while his neighbor starves.”

“The believer in God is he who is not a danger to the life and property of any other.”

In short, Islam neither neglects the individual nor society – it establishes a harmony and a balance between the two and assigns to each its proper due.