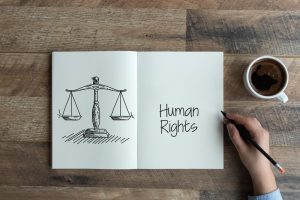 People have the right to enjoy fairness and justice.

We can summarize the basic principles of human rights in Islam in the following points:

1- Establishing the state on the idea of shura (consultation) starting with the choice of the ruler and paying homage to him to continue ruling under the obligation of abiding by Shari`ah rulings.

2- Enforcing the principle of legitimacy through the state executive authority and the judicial authority to protect the rights from all sorts of aggression or transgression and hence to prevent assault, taking captives and revenge.

3- Declaring the principle of equality between people, abolishing the system of classes and the habit of boasting with lineage and families, and establishing honor on the basis of piety alone; that is, on the basis of true faith accompanied by righteous work.

4- Establishing general freedoms on top of which come the sacredness of souls, honor, and properties along with housing, freedom of religion and opinion, freedom of work, and freedom of education as an obligatory right. It is a duty upon the society and the individuals to cooperate to preserve these rights.

5- Freedom of ownership accompanied by the obligation of social justice achieved through the imposition of zakah (obligatory charity) and other duties on the properties of the rich for the sake of the underprivileged and the needy through the system of maintenance.

6- Freedom of making contracts and the obligation of fulfilling them and the freedom of trading and transacting accompanied by the restriction of preventing usury, ghabn (unfair pricing), monopolization, gharar (hazardous sale of uncertainty), and coercion and the exclusion of wills and the obligations of inheritance.

7- Fair treatment of women by giving them the right of inheritance, ownership, and discretion together with the basics of honor and equality in rights and duties and establishing marriage on cordiality and mercy.

8- Regulating penalties and distinguishing between the public right or the right of Almighty Allah and the personal right and distinguishing between legal penalties prescribed by the Shari`ah and other penalties that are not prescribed but left for the discretion of the judge known as ta`zir in addition to regulating the conditions of the crime of murdering and deliberate injuries and determining blood money and compensations.

9- Setting the foundation of international law of relations exhorting peace and brotherhood and the obligation of fulfilling covenants disallowing aggressive war and allowing defensive war for the sake of repelling aggression against religion, home, and holy places, preserving the freedom of religion, and helping the wronged person even if he is non-Muslim.

10- Freedom of expression known as enjoining what is good and forbidding what is evil. This freedom is bound by the dictates of responsibility, for Islam considers the consequences of deeds and words. Thus, there is no freedom of speech to curse others or to disseminate harmful values in the society- it is responsible freedom.

11- The right of the poor and the weak in economic protection. Almighty Allah says,

Thus they feed with food- despite their own desire for it- the indigent, and the orphan, and the captive [of war]. (Al-Insan 76:8)

Moreover, in their wealth was a rightful share [of charity] for the beggar and the destitute. (Adh-Dhariyat 51:19)

12. The right of people in fairness and justice. Almighty Allah says,

O you who believe! Be ever upright for [the sake of] Allah, bearing witness [to truth] with [impartial] justice. Therefore, let not detestation [for some people] induce you to be unfair. [Rather,] be fair! For to do so is, indeed, closer to the fear of Allah. Therefore, fear Allah! Indeed, Allah is all-aware of all that you do. (Al-Ma’idah 5:8)

And whenever you judge between people, you shall judge with justice. (An-Nisaa’ 4:58)

13. The right of people on each other to cooperate and have mutual assistance. Almighty Allah says,

Others’ right of justice was not known before Islam. Islam was the first to acknowledge these rights regardless of sex, race, ethnicity, or religion.

14. The right to refuse prohibited things; that is, the right not to be forced to commit things prohibited by the shari`ah. The noble Messenger said, “No created being should be obeyed in disobedience of the Creator.” Almighty Allah said,

He said: The promise of My covenant shall not extend to the wrongdoers. (Al-Baqarah 2:124)

By virtue of this, no ruler can enact the lawfulness of something prohibited or detrimental to people’s interests. The juristic rule is that “the ruler’s management of the subjects is bound by serving their interest.”  Similarly, it is not for a powerful state or nation, even if it is a Muslim one, to impose things that cause harm to the interests of small countries.

Moreover, you shall not consume one another’s wealth by false means, nor proffer any of it to [bribe] those in authority, in order to sinfully consume a portion of people’s wealth- while you know [it is wrong].”  (Al-Baqarah 2:188)

O you who believe! You shall not enter homes, other than your own homes, until you take [welcome] permission and greet their people with peace. That is best for you- so that you may become mindful [of the benefit of Allah’s commandments]. But if you do not find anyone therein, then do not enter them until permission is given to you. Moreover, if it is said to you: Turn back! then turn back [and do not persist]. That is purer for you.  (An-Nur 24:27-28)