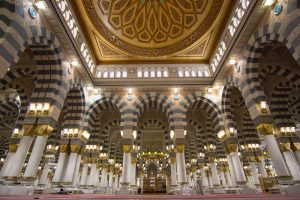 The Prophet sent letters to various neighbouring Arab and non-Arab rulers, including Chosroes of Iran and Heraclitus of the Byzantine Empire.

The Prophet (peace be upon him) after arriving in Madinah, first formed an alliance with the Jews. Next, he approached all the nearby tribes and tried to persuade them to make an alliance or at least enter into a no war-pact. Many did. Thus the small group evicted from Makkah assumed strategic importance.

The Makkans who had earlier planned to kill the Prophet, were now determined to annihilate this nascent community of Islam. Having failed in all other ways, they decided on a military solution.

A heavily armed Makkan force marched towards Madinah in the second year after Hijrah, on the pretext of protecting their trade caravan. The Prophet, despite his community’s small number and lack of arms, decided to face their threat boldly.

On the 17th of Ramadan, at Badr, the two forces met and fought a battle in which 313 Muslims defeated the 1,000- strong Makkan army. Seventy of the Makkan chiefs who had been most active and vehement in persecuting the Muslims were killed; many others were taken prisoner, later to be released for ransom.

For the first time, prisoners of war were treated humanely and kindly; they were fed and housed in the same way as their captors ate and lived. In the third year after Hijrah, a 3,000-strong Makkan force again marched on Madinah, both to avenge the defeat at Badr and to make another attempt to defeat the Muslims; 700 of them were mailed and 200 mounted. The Muslims numbered only 700. The two sides met just outside Madinah near the Uhud Mountain.

The initial Muslim victory was, however, reversed; the Muslim contingent posted to protect the rear, violated the Prophet’s instructions and abandoned its position. The Quraysh attacked from behind, and victory was turned into defeat, resulting in the deaths of about 65 Muslims. The Makkans, however, failed to pursue their advantage and clinch victory.

The Makkans now planned to make a final assault on Madinah to settle the matter once and for all. All Bedouin tribes, Jews, and hypocrites within Madinah joined forces with them.

In the fifth year after Hijrah, 24,000 of them advanced on Madinah. It was impossible to fight them on the open battlefield, or defend Madinah which was without walls. The Muslims therefore defended themselves by digging ditches all round Madinah. After laying siege to Madinah for 25 days, due to inner dissension, lack of supplies, cold weather and high winds, the Makkan army was forced to withdraw.

This was the turning point in the history of confrontation with the Makkans. Madinah was never to be attacked again. From the beginning, the Jews were given full rights of citizenship, yet they still committed acts of treason and treachery. Some had to be expelled; some were killed as a result of judgements given by an arbitrator appointed by them.

However, subsequent generations of Jews were never held responsible for the misdeeds of the Jews of Madinah, as they were in Christendom for 2,000 years, for the crucifixion of Jesus. Instead, the Muslims always treated them justly and kindly.

The next year, the sixth after Hijrah, the Prophet and 1,400 Companions journeyed to Makkah to perform Umrah, the lesser Pilgrimage, in accordance with several traditions of the time. They were unarmed. The Quraysh chiefs, against all established and accepted traditions, refused them admission. However, the Quraysh were now so low in morale and strength that they had to sign a peace treaty with the Prophet, the Hudaybiyah Treaty.

Though the terms appeared highly unfavourable, even humiliating, for the Muslims, they made tremendous gains by virtue of this Treaty. They, who were driven out of Makkah and attacked thrice, were now recognized as an equal force, to be treated respectfully, taken seriously.

Peace provided an opportunity for the wavering and the neutral, even the hostile, to witness Islam at first hand, and many sensed the imminent victory of Islam. The result was that many Makkans and Arab tribes either embraced Islam or made peace with the Prophet.

As soon as the Hudaybiyah Treaty was signed, the Prophet sent letters to various neighbouring Arab and non-Arab rulers, including Chosroes of Iran and Heraclitus of the Byzantine Empire. He invited them to Islam, and assured them that he did not covet their kingdoms or riches. They could retain both, but only if they surrendered themselves to serve and worship the One God.

The Quraysh, however, soon broke the Treaty of Hudaybiyah. It was, thus, time to deal with their continuing hostility. The Prophet marched to Makkah, and captured the town. The fall of Makkah witnessed unparalleled acts of mercy, forgiveness and generosity. Not a single drop of blood was shed. Everybody who remained indoors was granted security of life and property. The Prophet forgave all who had been his bitterest foes all his life, who had persecuted him and planned to kill him, who had driven him out of Makkah, and who had marched thrice to Madinah to defeat the Muslims.

The neighbouring Byzantine Empire now prepared to attack and destroy the Muslim community in Madinah. However, when the Prophet marched to Tabuk on the northern border, his determination, courage and timely response made the enemy lose heart and withdraw.