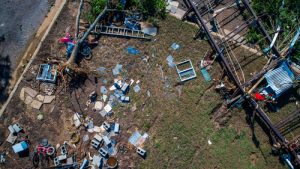 It is the nature of this life to face trials and suffering for different reasons.

It is the nature of this life to face trials and suffering for different reasons.

Muslims believe that calamities and disasters are a test from God (Allah). These tests are a sign of God’s love for the believers. This what distinguishes a believer from a non-believer.

Aishah (may Allah be pleased with her) reported: I heard Allah’s Messenger (peace be upon him) as saying:

“There is nothing (in the form of trouble) that comes to a believer even if it is the pricking of a thorn that there is decreed for him by Allah good or his sins are obliterated.” (Muslim)

Jabir (may Allah be pleased with him) narrated that the Prophet (peace be upon him) said:

Prophet Muhammad (peace be upon him) is reported to have said:

This is a very interesting way of looking at trials we are given in this life.

Muslims believe that the trials and calamities are a sign of man’s weakness and his need for a Divine Lord to believe in and have strong faith in Him and that man cannot succeed unless he realizes his need for His Lord and starts beseeching Him and supplicating Him for guidance and help.

Muslims believe that these calamities and disasters are good for them. Because if they are not afflicted in this world, they will be punished in the Hereafter. These calamities expiate for the believers’ sins.

The Prophet is reported to have said:

“When Allah wants good for his slave, He hastens his punishment in the world. And when He wants bad for His slave, He withholds his sins from him until he appears before Him on the Day of Judgement.” (At-Tirmidhi)

“Trials will not cease afflicting the believing man and the believing woman in their self, children, and wealth, until they meet Allah without having any sin.” (At-Tirmidhi)

When the believers face these calamities and disasters with patience, they will be greatly rewarded by Allah.

The Prophet is reported to have said:

We are told that the Prophets (peace be upon them all) were sorely tried.

” It was narrated from Musab bin Sad that his father, Sad bin Abu Waqqas, said:

Prophet Ayyub (Job) was tested will sickness. Prophet Yunus (Jonah) lived in the belly of a whale.

Prophet Yusuf (Joseph) was sexually assaulted and then sent to prison to cover up the crimes against him. Prophet Ibrahim (Abraham) was literally thrown in a fire by his own father.

Therefore, trials are part of this worldly life.

What Believers Say When They Are Afflicted?

Muslims believe that when anyone of them is afflicted with calamities, he should say: Inna Lillahi wa inna ilayhi raji`un (Verily to Allah we belong and unto Him is our return.)

And We will surely test you with something of fear and hunger and a loss of wealth and lives and fruits, but give good tidings to the patient,

Who, when disaster strikes them, say, “Indeed we belong to Allah, and indeed to Him we will return.”

Those are the ones upon whom are blessings from their Lord and mercy. And it is those who are the [rightly] guided. (Al-Baqarah 2:155-57)

Umm Salamah reported Allah’s Messenger (peace be upon him) as saying:

“If any Muslim who suffers some calamity says, what Allah has commanded him,” We belong to Allah and to Him shall we return; O Allah, reward me for my affliction and give me something better than it in exchange for it,” Allah will give him something better than it in exchange. When Abu Salamah died she said: What Muslim is better than Abu Salamah whose family was the first to emigrate to the Messenger of Allah (peace be upon him). I then said the words, and Allah gave me God’s Messenger (peace be upon him) in exchange. She said: The Messenger of Allah (peace be upon him) sent Hatib ibn Abu Balta`a to deliver me the message of marriage with him. I said to him: I have a daughter (as my dependant) and I am of jealous temperament. He (the Prophet) said: So far as her daughter is concerned, we would supplicate Allah, that He may free her (of her responsibility) and I would also supplicate Allah to do away with (her) jealous (temperament).” (Muslim)

When you are faced with trials, put your trust in your Creator. Be sure that He is always there to help. He is the best Helper. If you are left alone, there is a Merciful Creator who will stand beside you. God knows every moment of your struggle. So, be sure that he will reward your greatly for that struggle.